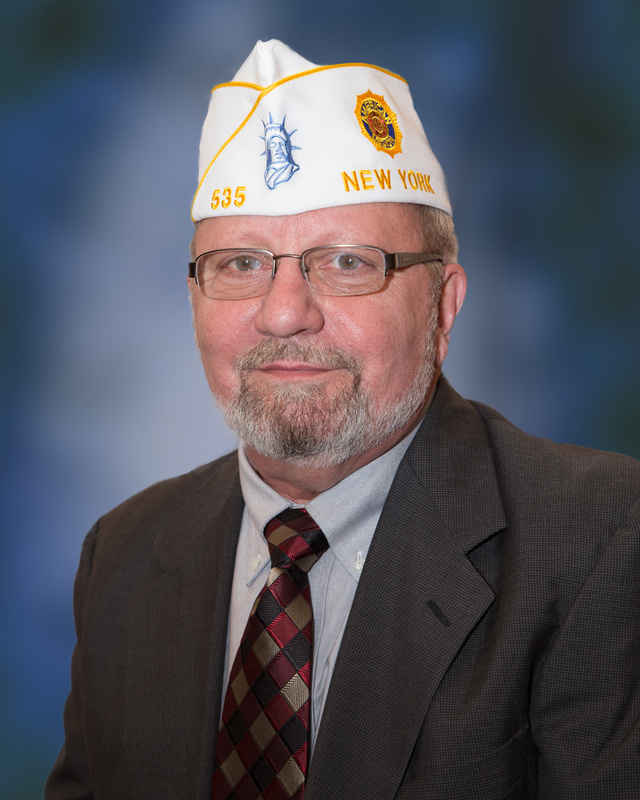 John B. Sampson is a Vietnam-era veteran who served in the U.S. Navy.

He led the New York State American Legion, which consists of more than 113,000 members and some 900 posts spread throughout 62 counties. With the affiliated organizations of the Legion Auxiliary and Sons of the American Legion, the total jumps to nearly 200,000.

Sampson is the first state commander from Cattaraugus County in the Legion’s nearly 100-year history.

Commander Sampson, along with the President of the Auxiliary and the Commander of the Sons of the Legion, spend the 2016-2017 year visiting every county in the state to bring a message to as many legion posts as they can.

Sampson is focusing on the issues of communications and the Legion’s image, especially in the eyes of younger and newer veterans.

When looking to recruit newer and younger vets, Sampson notes, getting information on the legion out to as many people as possible means “we have to communicate on their level” – especially with the popularity of online news and social media for the younger generation.

Involvement in dozens of community service projects consumes a lot of the Legion’s time and effort. Sampson says he wants to make sure younger vets know about all the projects they can contribute to.

“We can impact a lot of lives.”

Inducted into the New York State Senate’s Veterans Hall of Fame in May 2016, Sampson served in the Navy from August 1967 to February 1972 with assignments on the U.S.S. Freemont attack transport and at Randolph Air Force Base in San Antonio, Texas, as part of a joint military command. He served as an amphibious squadron coxswain and then as a personnelman.

After completing his military service, Sampson became an accredited Veteran Service Officer for Cattaraugus County, a position he held for over two decades.

In the American Legion, Sampson held positions at post, county, department and national levels. A 40-year member of Hughes-Skiba Legion Post 535 in Salamanca, he served as post commander in 1986 and 1987. He also served on more than a half dozen other committees, including the Post Color Guard, which he has served on since 1988.

Sampson also served as Cattaraugus County Commander in 1988 and 1989. He has also held leadership positions with the district American Legion, which covers much of Western New York.

His national involvement includes serving as vice chair of the Americanism Commission from 2004 to 2013 and serving as chair of the national Veterans Education, Other Benefits and Homelessness Committee from 2013 to 2015.

A past president of New York State Veterans Service Officer Association, Sampson was the founder of the Cattaraugus-Allegany Joint Veterans Council Volunteer Van Service and remains active in the program.

He also serves on the Board of Directors for the World War II Museum in Eldred, Pa., the City of Salamanca Youth Board and the Selective Service System’s Local Draft Board #90. Among Sampson’s state Legion honors is being named Service Officer of the Year. He is also a member of the Sons of the American Legion.

Commander Sampson and his wife, Vicki, have two children and three grandchildren.