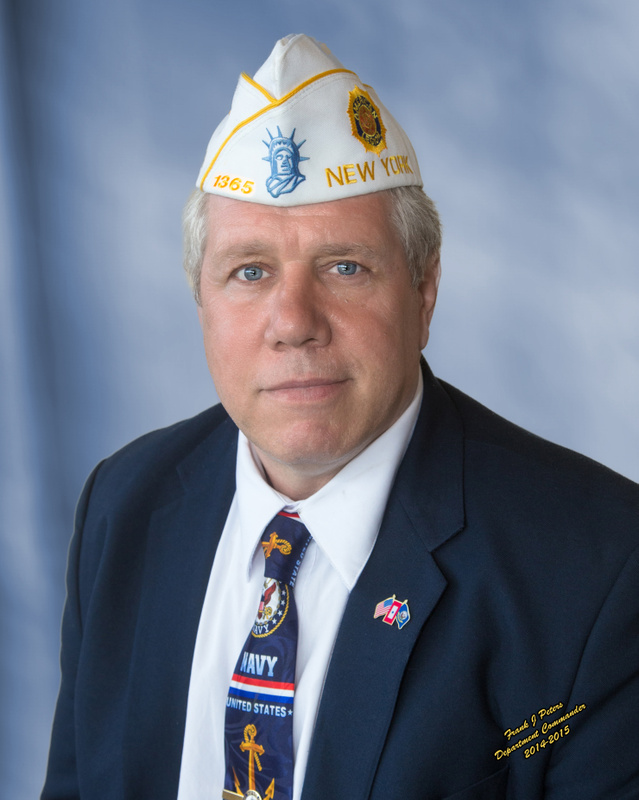 Frank J. Peters of Staten Island is a Navy veteran and retired ferry boat captain. As department commander, he is focusing on “honoring all who served.”

A 25-year member of Gold Star Post 1365, Peters has held numerous positions on every level of The American Legion, including serving as post commander, Richmond County commander and 2nd District commander. On the Department level, he has been a member of the Public Relations and Legislative committees; and has served as president of the New York American Legion Press Association. On the national level, he has served on the Legislative Council, National Security Commission, and Aerospace Committee. He has been a delegate to both state and national conventions.

Peters enlisted in the Navy in 1981, trained as an aviation electrician and served aboard the USS Independence during the Lebanon and Grenada conflicts.

Later, while employed as a captain with the Staten Island Ferry, he enlisted in the Navy Reserve, serving as a coxswain and small boat operator for Mobile Inshore Undersea Warfare Unit 204 stationed at Fort Dix, NJ. His military honors include the Naval Unit Commendation, Battle “E” Ribbon, two Navy Expeditionary Medals, and the Armed Forces Expeditionary Medal. He also was awarded the New York State Conspicuous Service Star and the New York State Medal of Merit for conspicuous service with a decorated military unit in direct support of combat operations.

Peters was awarded the U.S. Department of Transportation 9/11 Medal for meritorious service as captain of ferry-boat John F. Kennedy following the attacks on the World Trade Center on Sept. 11, 2001.

A native of Staten Island, Peters lives in the community of Travis with his wife, Mary. They have two daughters, Mary Margaret, who is currently serving in the U.S. Navy, and Emily Frances.

In 1997, he received an Outstanding Citizen Citation from the NY State Assembly in recognition of his work on behalf of veteran and community organizations. He has served on the Public Service Committee of his local community board and is a past president of the Travis Civic Association.