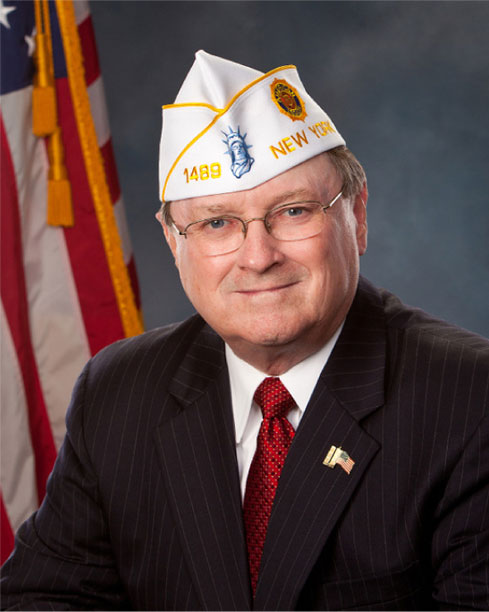 Kenneth Governor of North Greenbush is a retired U.S. Army major with nearly 30 years of active and reserve service.As department commander, he is zeroing in on what has been his personal motto – “Service First.”

That focus served him well in the Army, where during his last tour he ensured that National Guard units were logistically ready for deployment in the first Gulf War. Concentrating on making sure every soldier and every unit had everything they needed to sustain and protect themselves in combat and to be able to decisively engage the enemy and win, Ken and his team were cited for the best prepared units to arrive at the mobilization and embarkation centers.

His focus on service followed him into the civilian world, where his leadership, administrative and logistical talents were recognized by a rapidly expanding technology business. Some of Ken’s professional responsibilities included negotiating all office leases and space restructuring in ever-increasing locations throughout North America, establishing and managing a complicated international insurance program to cover the growth of world-wide business operations of a publically traded corporation, and supervising the expansion and construction of a New York headquarters facility.

He has held a number of state and national posts. He was the Department’s public relations chair for several years. He was chair of the National Legislative Commission, charged with the exclusive responsibility of representing The American Legion before Congress, and the vice chair of the National Legislative Council, a nationwide network of Legionnaires that keeps lawmakers and other government figures aware of Legion positions on key issues. In fact, in March 2011 he received the Legislative Council Member of the Year Award during the 51st American Legion Washington Conference. Ken was recognized for his ability to build close working relationships with members of Congress and for his communication skills with National Legislative Division staff and new members of the council. Then-National Legislative Commission Chairman Daniel Dellinger said the award recognizes “someone who takes time from a busy life to sound a rallying cry to America’s veterans, many of whom cannot always speak for themselves.”

Governor serves as a legislative liaison to Sen. Kirsten Gillibrand, D-N.Y. He was on her Veterans Advisory Committee during her term as a member of the House of Representatives from 2007 to 2009.

During the 2011 Department Convention, Governor was elected to a three-year term as a director of the New York American Legion Press Association. For the past three years as Department PR chair, he coordinated a popular series of public relations workshops at the 2011, 2012 and 2013 Mid-Winter Conferences.

Raised in Boston, Mass., Ken is married to the former Sandra Gingeresky of Troy, NY. They have three sons, two daughters, and two granddaughters.

And now, at the helm of the Department of New York, he says it’s all about “Service First – to our service men and women, our veterans, their families, and our communities.” His personal project is the National Emergency Fund.