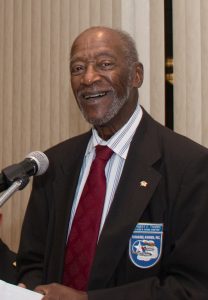 Herbert Thorpe was working with the Civilian Conservation Corps in Camden, NY, when on a fateful Sunday morning he heard that the Japanese had attacked Pearl Harbor. Like so many Americans, he would eventually enlist in the Army. But never did he imagine that he would rise above World War II-era racial discrimination and soar the skies as part of the Tuskegee Airmen, heralded by the 2012 film, “Red Tails.”

His younger brother took flight training at Tuskegee Institute in Alabama before Herb did. They even got to fly together before the younger Thorpe deployed to Europe and died during a training mission.

Thorpe enlisted in the Army Reserves in October 1942 and trained at Signal Corps School in Troy before beginning active duty military basic training in June 1943 at Fort Dix, N.J. and then at Kearns Field, Utah. He applied to Aviation Cadet School in December 1943 and was accepted. After Primary Flight School, he was transferred to Basic Training Flight School at Tuskegee Army Air Field. He was selected for multi-engine training in mid-1944, and transferred to Gunnery School at Tyndall Field, Fla. and then to Bombardier/Navigator School at Midland Army Air Field, Texas. He was commissioned a 2nd Lieutenant as a navigator/bombardier, Dec. 30, 1944 at Midland. He returned to Tuskegee and began Advanced Flight Training and earned B-25 (twin-engine) pilot’s wings in October 1945. He remained at Tuskegee and left service in August 1946.

Thorpe grew up in Brooklyn and returned there after the war, earning a bachelor’s degree in electronic engineering at New York University. He went to work at Brooklyn Navy Yard as a radar systems engineer from 1955 to 1959. He came to Rome in the fall of 1959 as a radar research engineer at Rome Air Development Center, Griffiss Air Force Base, retiring in 1982. He would go on to serve as a part-time counselor at Mohawk Valley Community College from 1984 to 1997.

As the Utica Phoenix aptly put it: “Thorpe was never deployed to fly in combat, but carries with him the rich history of a time when Black men proved to this nation and the world that truly all men are created equal, and that some are actually better than others at flying airplanes and overcoming adversity.”