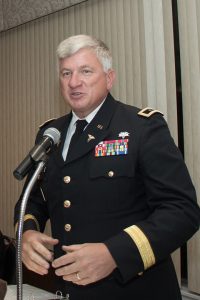 When Maj. Gen. Russell J Czerw (ret) was chief of the Army Dental Corps, he liked to inspire his newly commissioned doctors by telling them they were “a linchpin of Army readiness” and also that they held two professions – one as a dentist and another as a “professor of arms” who made the conscious choice to “defend the freedoms we hold so dear.”

Major General Czerw retired from the Army in 2010 after serving as the Chief of the Army Dental Corps and commanding both the U.S. Army Medical Department Center & School and Fort Sam Houston, Texas. His army career is replete with both dental practice and command opportunities across America and the globe – from Germany to Bosnia and Croatia to Poland to Iraq. For the latter, the major general served as task force commander for dental, preventive medicine, veterinary and combat stress control units in Operations Enduring Freedom and Iraqi Freedom.

After retirement he became the CEO of Housing 1 Source. He is currently retired and donates much of his time to special boards that serve military members and their families.

Major General Czerw was born, raised and schooled in Utica, New York. He received his Bachelor of Science degree in 1983 from Saint Lawrence University in Canton, NY, where he was also an ROTC Distinguished Military Graduate. He received his dental degree from the State University of New York at Buffalo Dental School in 1987. While in the Army, he completed advanced dentistry training at Fort Jackson, South Carolina and his residency in general dentistry at Fort Hood, Texas.

He received numerous awards to include the Distinguished Service Medal, Legion of Merit and Bronze Star. He is a member of the Order of Military Medical Merit.

He resides in San Antonio, Texas and spends the summers with his bride Michelle Alexander Czerw in Old Forge, NY. They have two children, Danielle and Brandon.