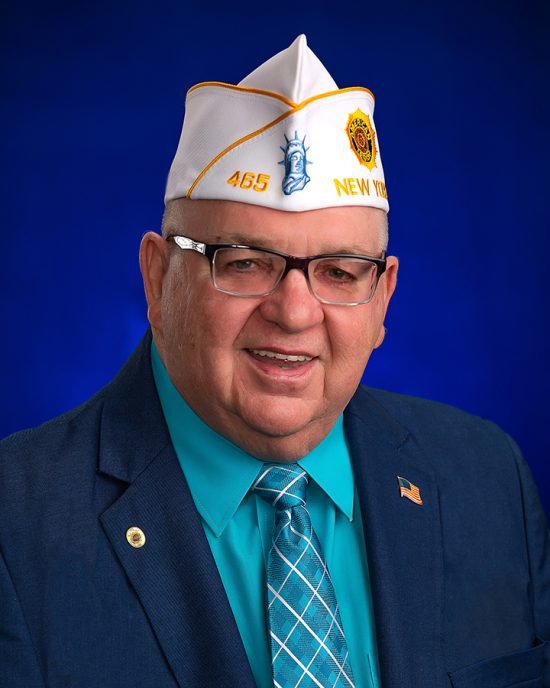 Mike McDermott of Homer is the first person from Cortland County to serve as New York State American Legion commander in the Legion’s 100-year history.

McDermott served in the U.S. Navy from 1964 to 1967, including a year in Vietnam where he worked in communication and intelligence with a Marine support battalion. On base he also served as a rifleman and assistant M60 machine gunner. While in Vietnam, he was promoted to petty officer 2nd class (E-5). Prior to deploying to South Vietnam, he attended jungle warfare school for weapons and survival training, and before that, he served in Germany as a cryptologic technician.

Born in Binghamton, he was raised in Cortland where he graduated with honors from St. Mary’s High School. Over the years he also attended Onondaga Community College, University of Maryland, SUNY Cortland, and Tompkins Cortland Community College.

His family includes his significant other, Diana Moreland, plus three children and six grandchildren.

The Department of New York encompasses over 800 Legion Posts spread across the state’s 62 counties. During his one-year tenure, McDermott is visiting every county to meet with members of the local Legion Family. His focus is on building membership and getting the word out about what the Legion does, such as advocating for veterans and working with youth through such programs as Girls State, Boys State and American Legion Baseball.

McDermott also emphasizes that The American Legion is about families – something he experienced as a kid.

“It was for families,” he said. “You brought your kids in, they had clam bakes, games for kids.”

He is excited about his year as state commander, calling it “probably one of the greatest accomplishments I’m ever going to have in my life.”

That is, “besides my kids, and grandkids.”