World War I ended on Nov. 11, 1918 after Germany surrendered. All nations immediately agreed to end hostilities, even though the Treaty of Versailles formally ending the “war to end all wars” wasn’t signed until June 28, 1919.

Between Germany’s surrender and the signing of the treaty, The American Legion was born. And men from New York played key roles. 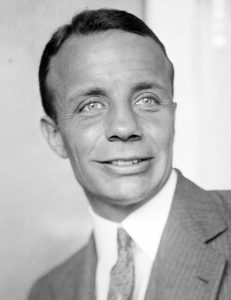 Theodore Roosevelt Jr., son of a former president and an officer in the American Expeditionary Forces in France, was always quick to insist that no one man can claim to be the founder of The American Legion. But this New Yorker has been described as the father of the Legion – the one who at least provided the organizational spark.

“I got the idea from a wounded sergeant in a hospital,” he recalled. “He said we should form an organization of veterans of the war, adding: ‘We have stuck together in the bad times; let’s stick together in the good ones’.”

Roosevelt continued: “After that, I talked with numbers of people, many of whom had been thinking on these lines.”

Through his contacts in the Army, he was able to get a number of soldiers sent to Paris to have a discussion ostensibly on the topic of American troop morale. At a dinner following the meeting, a group of 20 discussed plans to form a veterans’ organization.

“All agreed on certain principles. The first was that no difference should be made between those who had served overseas and those who had not – as the desire to serve was what counted. The second, there should be no question of rank, and privates would get a full chance to tell generals what they thought of them.”

Roosevelt ended up chairing an organizational committee. “We decided to hold two meetings, one in Paris and the other practically simultaneously in the United States.

That gave birth to the Paris Caucus, where several hundred fighting men came together from March 15 to 17, 1919, and where the name, American Legion, was adopted.

“The Paris meeting went off in splendid shape,” Roosevelt said. “Everyone was interested and enthusiastic. All units were represented, and privates as well as generals were delegates.”

Roosevelt had returned to the States prior to the Paris Caucus to begin the arrangements for the St. Louis Caucus, with the help of a cadre of other veterans.

“We hired an office in New York City and got in touch with ex-servicemen in every state, asking them to organize the soldiers and sailors in their community, elect delegates, and come to St. Louis on May 8, 1919. Everyone worked like beavers and the meeting in St. Louis was attended by delegates from every state.”

Thus, The American Legion burst onto the scene, with its first national convention scheduled for the following November in Minneapolis. An interesting note is that Roosevelt believed strongly that the Legion should avoid partisan politics and focus on veterans, their families, national defense, patriotism, and youth. Because he was a prominent young Republican, Roosevelt refused the clamoring call at the St. Louis Caucus for him to lead The American Legion. He wanted to avoid even the appearance that the Legion was not neutral.

Some 97 delegates from the Empire State organized the New York branch while in St. Louis, and returned home to build the Department of New York. Its charter, issued by the national organization on May 24, 1919, recognized New York’s founding roots to both the Paris and St. Louis Caucuses.

Growth was rapid. The Department issued its first Post charter on June 2. Exactly two months later, the Department issued a charter for its 200th post. By the time of the first national convention in the fall, the Department had held its own state convention (Oct. 10-11 in Rochester), and had seen the number of its Posts skyrocket to 646. It wasn’t uncommon for post membership to number in the thousands in those early years – unlike today when Posts are divided between those with less than a hundred members, those with several hundred, and those with 500 or more.

By the time of the first national convention, overall membership swarmed to over one million.

New York enjoyed over the years a membership roll of several hundred thousand men and women.

Today the Legion is still the largest wartime veterans service organization, with some two million members.

Over 100,000 men and women in some 900 Posts comprise New York’s membership today. With the affiliated organizations of the Legion Auxiliary and Sons of the American Legion, the combined membership total jumps to nearly 200,000.