Be Proud of Your Dept. 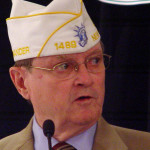 Outgoing Department Commander Ken Governor, on several occasions during the convention, made a point of letting over 650 attendees know that “we value your work, we value your service, we value your opinions” as well as “your strong support.”

He went on to declare, “be proud of your Department of New York,” especially as it takes steps to be more communicative and more proactive.

He cited a few examples.

— “Your American Legion is taking a groundbreaking step” in advocating for the “game-changing” hyperbaric oxygen treatment for post traumatic stress and traumatic brain injury. He compared it to the Legion’s persistent fight to get Agent Orange recognized as presumptive cause of many ailments in Vietnam war veterans.

— Your Department of New York is planning “to take the lead and do our own ‘System Worth Saving’ initiative,” conducting on-site inspections at VA facilities in the state.

— Your Department of New York service officers working at VA facilities continued to go into work and help veterans during the federal government shutdown.

— Your department launched a new website, chock full of resources and timely information for members.

— Your department published the second issue of Legion New York magazine, distributed at the convention and showcasing the Legion Family in action across the state.

— Your department issued press releases and statements on an array of veterans issues and on the accolades garnered by Legion Family members across the state.

— Your department conducts American Legion College, an immersion training in all things Legion and a proving ground for Legion leaders.

— Your department impacts youth and communities throughout the state through a number of incredible programs, such as Boys State, Oratorical Contest, Legion Baseball, Junior Shooting Sports, Scouting, and more.

Governor added that at the 2013 National Convention, he had the honor of seeing the Department of New York walk away with the top Americanism trophy for having the best children and youth, and family assistance programs.

“We had the best Americanism program in the entire American Legion, and that’s because of you!”